Carmakers manufactured in Wiltshire.Great Britain from 1988 to 1997. 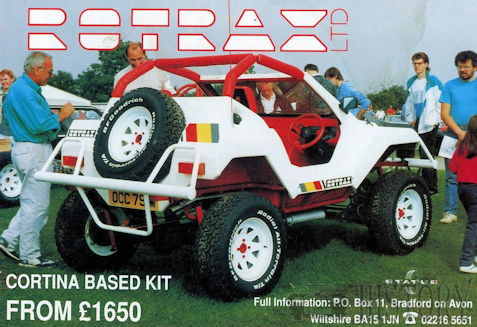 Dennis Adams, who previously worked for Marcos Cars , founded Adams Rotrax in 1988 in Bradford-on-Avon , Wiltshire . They started producing automobiles and kits . The brand name was Rotrax . In 1991, Mike Kenyon took over the company, renamed it JS Rotrax , and moved its headquarters to Bristol . In 1994 it became Rotrax Sales under the leadership of Paul Jelf. 1997 ended production. In total, about 75 copies were made. Rotrax Cars International of South Africa was also licensed .

The basis of the vehicles formed a off road type chassis . An open fiberglass body was mounted on top. The four-cylinder engine and other parts came from the Ford Cortina from the time. Great emphasis was placed on high ground clearance. Initially, only the two-seater Sport model was on offer. The four-seat safari with longer wheelbase supplemented the range in 1991 price from £1650.