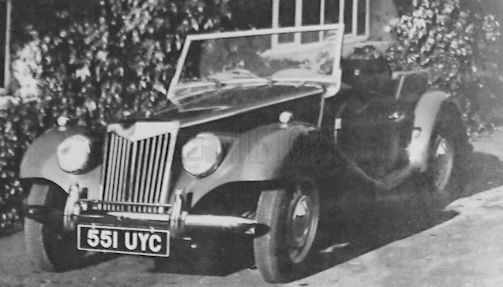 RMB Motors was a British manufacturer of kit car automobiles from the 1970s on .

Roger M. Blockley, who previously worked for Triumph , founded RMB Motors in 1973 in Barwell , County Leicestershire . He started producing automobiles and kits . The brand name is Gentry . Terry Phillips and Mick Sinclair of TM Motors from the same location took over production in 1989. Later followed a renaming in SP Motors and in 1997 in TP Motors , as Sinclair left the company. In 2001, the production ended first. The Vintage Motor Company from Pontefract in West Yorkshire Directed by Alan Beillby produced from 2002 to 2006 and Gentry Motor Car Company from Nuneaton in Warwickshire under the direction of Geoff Beston and Ellen Beston since 2008. A total of about 2500 copies have been created so far.

based closely around this timeless classic using exact replica wings and windscreen frame plus some very close overall dimensions. The car is based on the Herald or Vitesse Chassis. which gives, depending on choice, either good economy or sparkling performance. angle-iron framework clothed with an inner shell of bolt-on exterior grade plywood panels and an outer shell which encompasses the bonnet, side panels and dummy rear fuel tank all fabricated from sheet aluminium The structure is then finished with glassfibre wings, doors, scuttle and rear apron. The only modifications needed are the removal of the Triumph outriggers and the addition of a few extra earths to the wiring loom and any suspension and braking alterations that would be necessary if you elected to power the car with the meaty 2h litre TR6 motor. Necessary extras you'll require are a windscreen assembly, an MG Magnette ZA/ZB grille, Sprite Mk I wipers and a Triumph Spitfire fuel tank.

Apart from the second stage of kit assembly (£795 plus VAT), a custom chassis is available which accepts all the Triumph running gear, and to augment the basic kit, you can buy hood and sidescreens, tonneau cover, lights, chromed bumpers, door handles, a hard top, complete interior trim, etc.

The RMB Healey was a replica of the Austin-Healey 100 . The four-cylinder engine was from the MG B . From this model created between 1985 and 1988 about twelve copies.