Automotive manufacturer of Melton Mowbray , Leicestershire.Great Britain from 1986 to 1988. 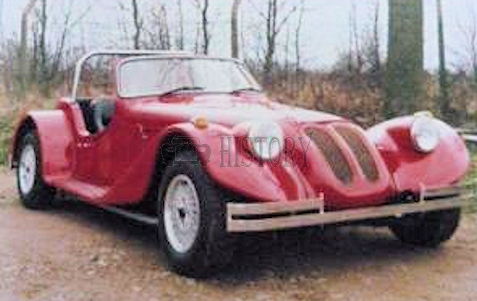 Pike Automotive Limited was a British manufacturer of kit car automobiles in the 1980s.

Arnold Pearce and Tony Brown founded the company in 1986 in Melton Mowbray , Leicestershire .  They took over a project from PYK in Lutterworth . This started the production of automobiles and kits . The brand name was Pike . In 1988 the production ended.  Overall, emerged only about 16 copies.

On offer were vehicles that were similar to the models of Merlin . They were open 2 seat roadsters . Many parts came from the Ford Cortina and Ford Sierra , as well as the pinto engines. The version with a Ford Essex  six-cylinder engine with 2800 cc capacity was initially called the Invader . As the model name Invader but already from Gilbern was used, they complained Gilbern Owners' Club , after the model name was then Pike Predator  used. This was also the name of the design with Four-cylinder engine model .