Automotive manufacturer of Blackburn , Lancashire.Great Britain from 1981 to 1987. 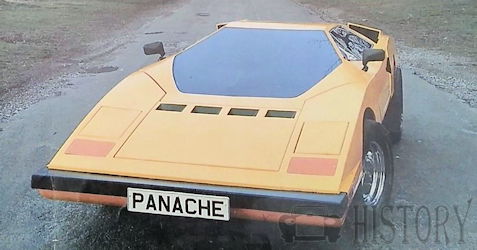 Paul Lawrenson designed a vehicle back in 1978, he founded together with Peter Robinson, the company Panache kit cars in Darwen in the county of Lancashire . They started with the production of automobiles and kits . The brand name was Panache . Bob Davies took over the company in 1985, renamed it Panache Cars Limited , and relocated to Blackburn , Lancashire. 1987 ended production. In total, about 131 were created.

The first model did not receive a model name other than Panache. It had a certain resemblance to the Lamborghini Countach . The unabridged chassis of the VW Beetle was the basis. Then a coupe body was mounted. A special feature was the forward-opening pulpit above the passenger compartment, similar to the Bond Bug . By 1985, about 71 copies were made.

Originally designed and built as a one-off based on the trusty Beetle chassis, the Panache has been developed into an exotic kit bearing more than a passing resemblance to the Countach The massive, chunky lines of the car are superbly by the unique forward hinging canopy, vast expanse of
pop-up headlamps and NACA side ducts. In fact the sheer styling of the rear end with its tunnelled back window and box scoops will fool most people into thinking they're following the real thing.

The complete kit sold for £1500 including VAT and supplies you with the bodyshell finished in red gel-coat, the canopy, screen, windows and access panels ready fitted, an untrimmed dashboard, the gas rams for the canopy, a set of bumpers, the headlamp pods and their actuating mechanism, and a small collection of hardware to hold it all together. The full length VW floorpan only requires modification in the seat well area to accomodate tall drivers and a pair of after-market seats. You'll have to find a pair of Capri headlamps and some form of flush fitting rear light units but, apart from that, the kit is fairly comprehensive. Laminated glass is used for the screen whilst Perspex keeps the cost of the side windows to a
minimum.

As the car uses so many standard parts plagiarised from other mass Production sources, the range of options is unsurprisingly small. Wide wheel arch spats are offered at around E50 a set and the manufacturers can obtain virtually any part required for customers

1985 followed with the LP 400 a replica of the Lamborghini Countach. Davies developed a leadframe with front suspension from the Triumph Herald . Various engines to V8 of Rover were in mid engine design mounted behind the seats. By 1987, about 60 copies were created.