Car manufacturer of Hayle,Cornwall.Great Britain from 1987 to 1991. 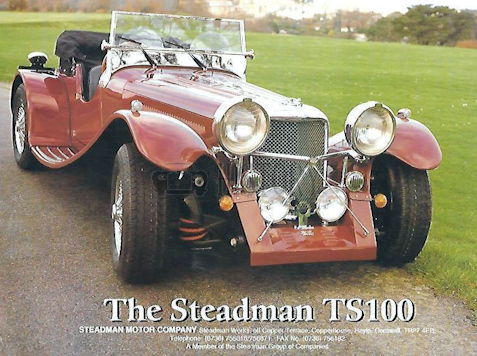 Ottercraft Limited was a British manufacturer of replica kit cars and automobiles .

1987 Bill Steadman established the company as part of the main company Traditional Car Panels in Hayle in the county of Cornwall . He began with the production of automobiles, and later of kit cars . The brand name was Steadman . At times, the company employed 30 people.  1991, the production ended when the company was dissolved. In total, about 28  copies were created.

The only model TS 100 was the high-quality  replica of the SS 100 from the 1930s. A steel ladder frame formed the base.  The a body was made of aluminum. Later fenders were available from cheaper fiberglass . A six-cylinder engine from the Jaguar XJ 6 powered the vehicles. The choice was between versions with 2800 cc, 3800 cc and 4200 cc engine capacity .  First, the original price was £21,995, which rose quickly to £49,500 for built cars.

From 1990, the vehicle was also available as a kit for prices from £14,000. In these models, the body was made entirely of fiberglass, and only at a large extra cost  aluminum body was also avaliable.