Automotive manufacturer of Salford , Greater Manchester.Great Britain from 1973 to 1999. 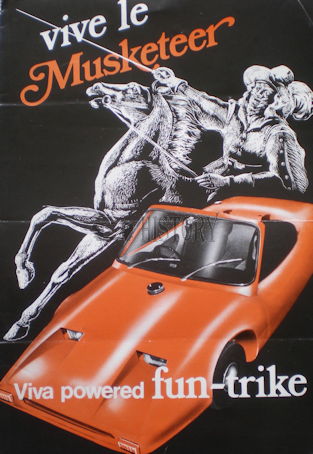 The company was founded on 19 September 1966. At first, it made trailers . 1973 began the production of automobiles and kits . The brand name was Mumford . Between 1978 and 1983 rested the automobile production. Brian Mumford and Jennifer Frances Mumford were directors from 31 December 1991.  The company headquarters a few years was in Nailsworth in the county of Gloucestershire , from 10 November 1994 Manchester and from 28 June 1995 in Salford in Greater Manchester . On April 7, 1999, the company was dissolved.

The only model was the Musketeer . This was a tricycle with a rear single wheel. The base formed a monocoque from aluminum with special suspensions. The engine came either from the Vauxhall Viva or Vauxhall Chevette , was mounted in the front of the vehicle and powered by a propeller shaft to the rear wheel.The incredible Mumford Musketeer is unusual in the fact that it uses Vauxhall Viva power and running gear shoehorned into a three-wheeled alloy chassis unit under a clean, aerodynamically profiled GRP body unit. The car is the result of over three years of drat; board, development and prototype work and only now that the manufacturers are satisfied with their project, have they unleashed it on an unsuspecting motoring world,

The basic kit is broken down into sub-assemblies with the main body/chassis unit selling for £655. Other parts required to complement this are the front and rear suspension, bonnet and nose fairing, seats and steering, headlamp covers and their operating mechanisms and finally an engine accessory kit to help the Viva Jump feel at home in its new surroundings. Designed around the HC Viva, yet also allowing the fitment of parts from the earlier HA and HB, the car will take any of the engines from this range through the 1057, 1159 and 1256cc units and we suspect that some devil-may-
care fiends will try fitting the 2300 mill in search of more performance! However, the Viva four-speed gearbox mates with a special aluminum case housing the crown wheel and pinion with a tubular axle stub designed to take the Viva drum brake at the rear. MacPherson strut front and coilover shock rear suspension keep the car on the road and the only additional parts you'll have to find are an HC windscreen if you're using an earlier model base cars

oviously, the main option with this car is the hood and sidescreens although the carpet kit could be a close second. Adjustable bucket seat belts, tachometer, temperature and oil pressure gauges are also listed along with a special alloy fuel tank.