Automotive manufacturer of Oxfordshire.Great Britain from 1974 to 1987. 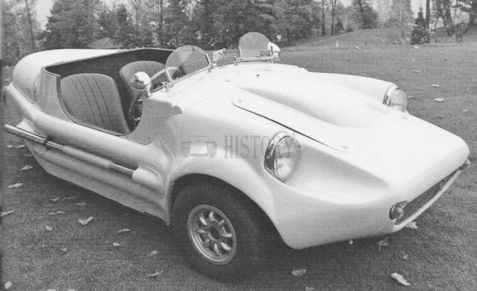 Mosquito was a British kit car brand from the mid 70s to the 1980s.

Robert Moss developed from 1971 a vehicle. In 1974 he founded the company Mosquito Cars in Kidlington in the county of Oxfordshire . He started producing automobiles and kits . The brand name was Mosquito . In 1977, the production ended. Until then, nine copies were made.

Mead & Tomkins; Hereford, .Mead and Tomkins were friends of Robert Moss. They sold motorcycles in Hereford in Herefordshire . They continued production from 1984 to 1987 and produced five more. The death of Tomkins meant the end for the brand.

Hereford's Malvern Autocraft , led by Rick Jones and Ian Bowse, took over the project in the 1990s, but marketed it as Triad .

The only model was a tricycle with a single rear wheel. Engine, transmission and front suspension came from the Mini . On top of that, an open plastic body was mounted.10 of the 14 vehicles still exist. Also the Trimin of Argyle was similarly designed.