Carmakers manufactured in East Sussex .Great Britain from 1983 to 2002. 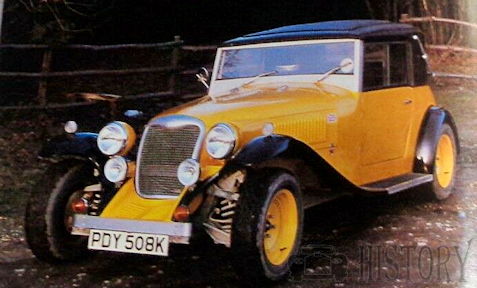 Peter Fairhurst founded Minion Cars in 1983 in Bexhill-on-Sea , Co. East Sussex . They started producing automobiles and kits . The brand name was Minion . In 1985, renamed the company Imperial Special Vehicles and relocated its headquarters to Eastbourne , East Sussex. Eagle Cars of Storrington , West Sussex , continued production in small quantities from 1988 to 1995. Jackal Cars from East Sussex followed from 1995 to 1998.

Last manufacturer was starting from 2001 Cotswold Kit Cars from Cheltenham in Gloucestershire . 2002 ended the production.In total, about 99 copies were made.

Minion Jackal this was a vehicle in the style of the 1930s, with a similarity to the Mercedes-Benz Mannheim , as a four-seatcoupe with GRP body and 90x50x3 steel ladder chassis . Four-cylinder engines and suspension from the Vauxhall Viva and Ford Cortina engines.There was also Minion Jackdaw wa a van version.