Automotive manufacturer of Bolton Lancashire.Great Britain from 1919 to 1921. 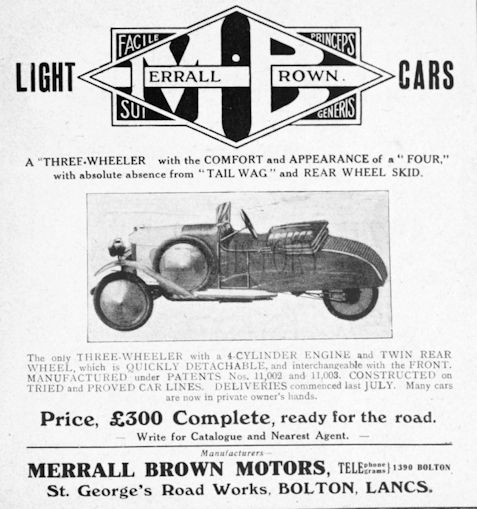 Merrall Brown Motors was a British automaker from Bolton in Lancashire . 1919 to 1921 were built there light vehicles under the name MB .

In the same year, a stronger model, the MB 10 hp , replaced this model. He was designed conventionally and had the same gauge front and rear. The wheelbase was 2591 mm. The car was powered by a four-cylinder inline engine with 1.5 l displacement.

A "THREE.WHEELER with the COMFORT and APPEARANCE of FOUR," with absolute absence from "TAIL WAG " and REAR WHEEL SKID. The only THREE-WHEELER with a 4-CYLINDER ENGINE and TWIN REAR WHEEL, which is QUICKLY DETACHABLE, and interchangeable with the FRONT. MANUFACTURED under PATENTS Nos. 11002 and 11,003. CONSTRUCTED on TRIED and PROVED CAR LINES.

In 1921, the brand disappeared from the market.