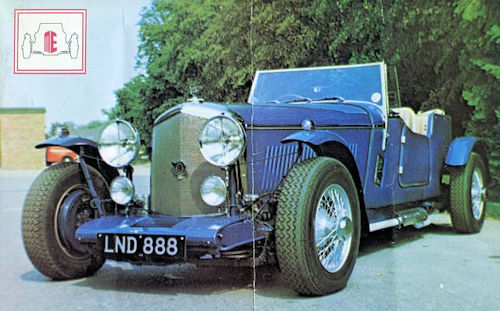 Mallalieu Engineering Limited was a British manufacturer of automobiles . The brand names were Mallalieu and Microdot .

1974 Derry F. Mallalieu founded the company in Abingdon in the county of Oxfordshire and began the production of automobiles.  Derry Mallalieu died in 1975. In 1981 the production ended. Overall, more than 30 Mallalieu , while there are no production figures for Microdot .

These vehicles were based on the chassis of the Bentley Mark VI . Then a new body was mounted. The model Barchetta Open Tourer appeared in 1974 and cost from 9950 pounds . The construction of the vehicle took four months. Mercia , later renamed Oxford , was a two-seater. Its construction lasted six months. The price was from £1500 pounds. Many vehicles were exported to the USA .

The Microdot was a development of William Towns of 1976. Between 1980 and 1981 Mallalieu made this model. It was a microcar. The choice was petrol engines from the Mini and Reliant and various two-stroke engines . With prices of 4000 pounds for the basic version and 7000 pounds for the luxury version of the vehicle was too expensive to succeed in the market.