Car manufacturer of Lorton at Cockermouth, Cumbria; Great Britain from 1984 to 1985. 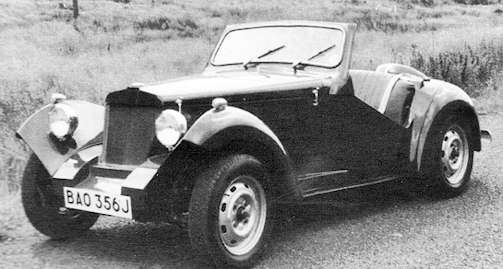 Lakes Sports Cars was a British manufacturer of retro style automobiles in the 1980s. The brand name was Voyager .

Andrew McClellan founded the company in 1984 in Lorton near Cockermouth in County Cumbria . He started producing automobiles and kits. In the following year the production ended. In total, about six copies were made.

The Model I was first presented in 1984 on a kit car show in Stoneleigh . The basis was the chassis of VW Beetle . An open two-seat fiberglass roadster body in the style of the 1930s was mounted on it. The four cylinder boxer engine of the VW Beetle was mounted in the rear. The vehicle remained a unique piece. While contemporary magazines praised the looks of the exterior, the by now dated mechanics were criticized. The manufacturer then designed a revised model.

In the same year the sport appeared that had a new chassis with front engine. Many parts came from Vauxhall Viva . The bodywork was also redesigned. By 1985, only about five copies were made.

Car manufacturer of Lorton at Cockermouth , Cumbria; Great Britain from 1984 to 1985.