Automotive manufacturer of Oxfordshire.Great Britain from 1971 to 1975. 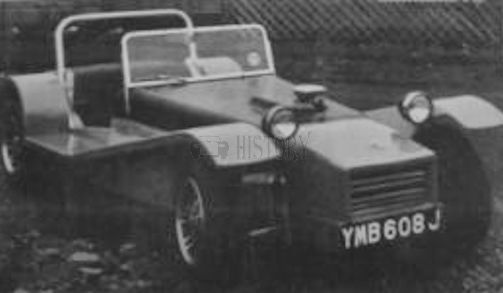 Jeffrey Racing Cars was a British automaker in Shilton (Oxfordshire) . The company became known for its kit cars . From 1971, complete sports cars were built there.

George Jeffrey founded the company in 1968.  First, he built a  race car. 1971 followed the first model, which was street legal. The brand name was Jeffrey . By 1974 ended production. In 1975 the company was dissolved. Dave Cox of Emba Cars manufactured from 1974 to 1975 some vehicles of the second road model J5, which also marketed as Jeffrey .

The first road model was the Jeffrey J 4 of 1971. The vehicle consisted of a tube frame, the chassis from the Morris Minor , steering from Triumph , a built-in motor of Ford of Britain and a lightweight body made of fiberglass . The open roadster was similar to the Lotus Seven and weighed only 500 kg. The wheelbase was 2286 mm. By 1972, around 30 were created.

In 1972 to 1975, there was the Jeffrey J 5 , . This model was available only as a road vehicle. Initially, the body was made of aluminum and fiberglass, later made of fiberglass. The tubular frame of the previous model had been reworked. The drive  had various four-cylinder pre crossflow engines and later crossflow from Ford at the customer's request. The engine capacities ranged from 1.1  to 1.6 l. By 1974, 26 copies were made at Jeffrey Racing Cars and until 1975 another six at Emba Cars.