Automotive manufacturer of Norwich , Norfolk.Great Britain from 1982 on 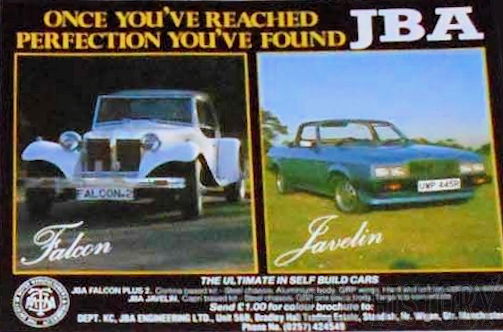 Ken Jones, John Barlow and Dave Ashley founded the company JBA Engineering Limited in 1982 in Standish near Wigan in County Greater Manchester . They started with the production of automobiles and kits . The brand name is JBA . Barlow left the company a little later. In 2004, Tim Banwell took over the company. In the same year the production ended and in 2007 the company was dissolved.In 2008, Bill Willcock began development with the support of his son Matt and, in 2011, new production of new vehicles at the new JBA Motors plant in Norwich , Norfolk . The brand name has been retained. In total, over 1700  have been created so far.

The company produced with the model series Falcon open vehicles in the style of the 1930s, which have a similarity to the MG TF . There were several versions such as Roadster (1982-1985), Plus 2 (1985-1989), Sports (1988-2004), Tourer (1990-2005), SR and SRI (1991-2005) and TSR (1993-2004). They offered space for two, 2 + 2 seating or 4 people. Initially, the body was made of steel panels . A little later, the body was made of aluminum and the fenders made of fiberglass, Finally, the entire body was made of fiberglass. The body shape was changed over time. Thus, the vehicles were wider and lower, received a trunk lid and a sloping standing windshield . First, used four-cylinder pinto engine from the Ford Cortina. Later engines from the Ford Sierra , V6 engines from Ford and V8 engines from Rover were used.

The Javelin was based on a steel ladder frame . On it a body made of fiberglass was mounted. The vehicle had a targa roof and behind a small folding soft top. The basis was the second and third generation Ford Capri . 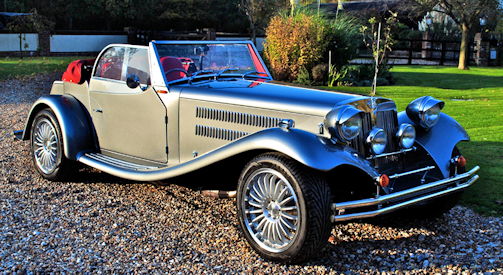