Automotive manufacturer of Lowestoft Suffolk.Great Britain from 1919 to 1920. 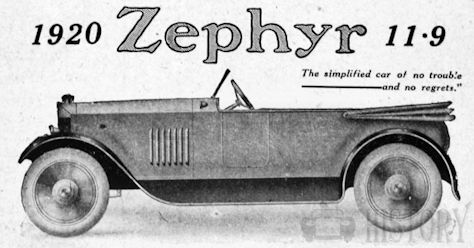 James, Talbot & Davison Ltd. was a British company with the Brand name Zephyr.

Messrs James, E. Talbot and Davison were formerly employed by Adams & Company . They founded their joint venture in Lowestoft Suffolk and started developing an automobile. Pistons for other cars such as Ford were made but by 1914 there own prototype was ready. In November 1919 a vehicle was presented at the Olympia Show . Series production ran from 1919 to 1920. The brand name was Zephyr . In total, four or five copies were made. The company existed in the field of fishing even after the Second World War .

The only model was the 11.9 HP . A four-cylinder engine with OHV valve control and 1945 cc displacement was mounted in the front of the vehicle and propelled the rear axle via a cardan shaft . The transmission had four gears. The choice was two and four-seater bodies. The price was £350 to £450 .