Automotive manufacturer of Warwickshire.Great Britain from 1978 to 1989. 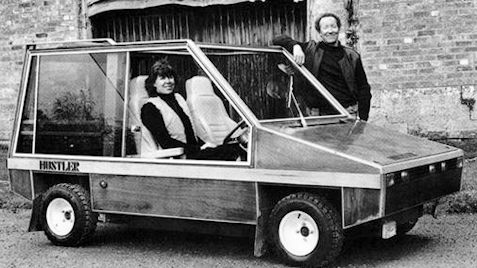 Hustler was a British kit car brand with 4 or 6 wheel layout.

The designer William Towns - who was also responsible for the Aston Martin Lagonda - designed the vehicle in 1978 and later produced the kits in his design studio Interstyl in Compton Verney in Warwickshire . It was a kit car . Basis of the vehicles was the mini .

The original version had steel frames made of square profile beams clad with fiberglass panels and large, flat windows. Most models had sliding doors. The front and rear subframes as well as the mechanics came from the Mini, Metro or BMC ADO16 . The Hustler was available with four and six wheels. In the six-wheeled version, two subframes of the Mini were used in the back.  .

Around 500 various model versions were produced until 1989.

Hustler 4 Original version on a mini basis.Hustler 6 With two rear mini subframes, four rear wheels were made possible.Hustler Huntsman Bigger, more powerful model based on the 1100/1300 or Mini-Metro. Versions with 4 and 6 wheels.Hustler Hellcat Spartan SUV version with 4, more rarely with 6 wheels.Hustler sports Two-seat convertible on mini basis.Hustler Sprint Two-seater coupe on a mini base, with a flatter windshield and a roughly 8-inch lower body.The Hustler in Wood With plywood boards, light metal frame and glass construction.Hustler Holiday Combination version with 4 or 6 wheels.Hustler Force Model with conventional instead of sliding doors. With 4 or 6 wheels.Hustler Highlander Six-wheeled luxury model with Jaguar V12 engine, of which only eight were built.Hustler Harrier High roof version that could accommodate a wheelchair in the rear. 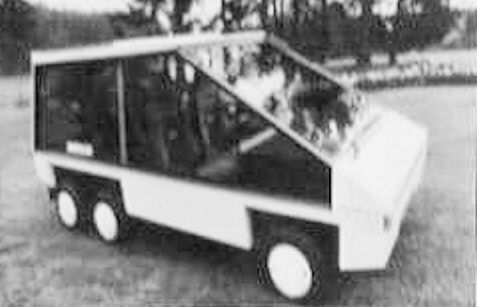 More information on
Hustler
Automotive manufacturer of Warwickshire.Great Britain from 1978 to 1989.