Automotive Manufacturer of Hitchin , Hertfordshire;United Kingdom from 1988 to 2003 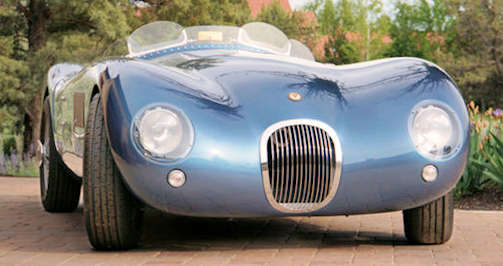 Heritage Cars Limited was a British manufacturer of replica automobiles . The brand name was Heritage Replicas .

Roger Warrell and Jack Frost founded in 1988, the company in Hitchin in the county of Hertfordshire . They started with the production of quality automobiles and kits often sold to the USA. In total, about 78 copies were made.2003 ended production.

The first and best selling model was the C-Type . This was the replica of the Jaguar C-Type of Jaguar Cars . A tubular frame formed the base. Then an open two-seater body was mounted. Many parts came from the Jaguar XJ 6 . Overall, between 1988 and 2003, about 35 copies were made.  Realm Engineering continues production since 2003 under its own brand name.

From T 70 , a replica of the Lola T 70 , created between 1991 and 2002 about 25 copies. The Knobbly appeared in 1992 and is modeled after the racing car Lister-Knobbly-Jaguar. Until the cessation of production in 1994 after an objection by Lister Cars created about three copies.