Automotive manufacturer of Caversham , Berkshire.Great Britain from 1919 to 1931.

The Herbert Engineering Co. Ltd. was a British company from Caversham near Reading in Berkshire.

Herbert Merton founded the company in the 1910s. During the First World War , defective aircraft engines were repaired.

1919 began the car production. Built were reliable light sports cars under the name HE , which were equipped until 1929 with side-controlled four - cylinder engines with Zenith carb and 4 speed and reverse gearbox. 1928 appeared the first six-cylinder model . The cars were reminiscent in appearance, design and price of the contemporary 3-liter Bentley models but prices from £550 to £900.In 1931,Body styles from small 2 seat sports to Landaulets with 14 to 20 hp the sales figures had dropped so much that economic production was no longer possible. 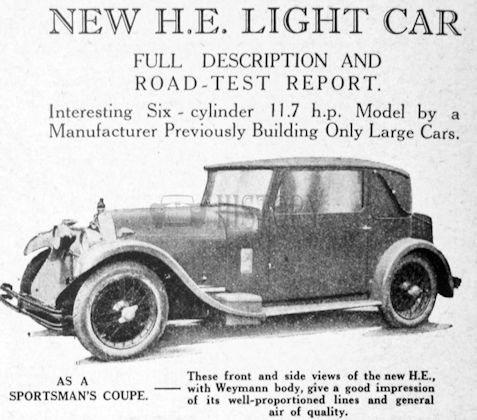