Automotive Manufacturer of Brighton.United Kingdom from 1950 to 1951 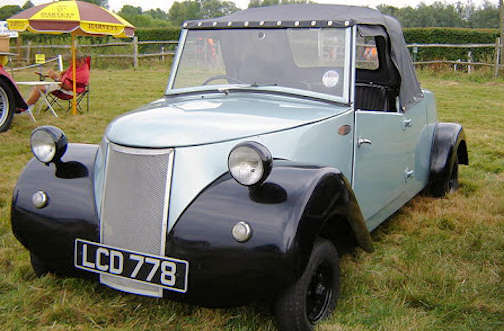 Hazeldine Motors was a British manufacturer of automobiles . The brand name was Hazelcar for passenger cars and Hazelvan for vans.

Eric Hazeldine ran the business in Telscombe Cliff near Rottingdean Brighton in the 1940s , now part of Brighton and Hove . His wife Ruth and his brother Roy supported him. At the latest in 1950 began the production of automobiles. A totaly about 25 vehicles built. up to 1951.

In 1952 the couple emigrated to Canada.  Battery Manufacturing Association of Hove and offerd them as BMA . based on these electric cars from 1952 with a choice of 4 battery types  on fitted with electric and hydraulic brakes transmision via a Duplex chain.

First, two prototypes emerged these a small 2 seater  they received the British license plates FNJ 81 and JUF 976 .From 1950, the goal was to produce a vehicle that was capable of reaching 80 km / h top speed . The first prototype was powered by a motorcycle engine from Indian , which was too weak and a Ford 8 engine fitted.

The couple used the vehicle with the license number KUF 959 at various trials from 1950 , including the Daily Express 1000 Mile Reliability Rally in November 1950, which led from London via Scotland to Torquay . Here, as in later models came a four-cylinder engine of Ford of Britain with 933 cc engine capacity used. When the two-seater Roadster was the engine was mounted in mid-engine construction in front of the rear axle.

The vehicle with the license plate LCD 778 (above) was bought in 1951 by Roderick Jones KBE of Rottingdean for his son Dominick, who drove it until 1957. Archie Hazell took over in the same year, the no longer mobile vehicle, his son Arthur Hazell restored it later. Now it's on display at the Bentley Wildfowl & Motor Museum in Halland . Later, four-seater superstructures were also built in which the engine position is not known. One of them was marked LCD 597 .

A version Hazelvan as a delivery van was also offered. The local bakery Forfars only two copies built.