Automotive manufacturer of Great Britain from 1966 to 2010. 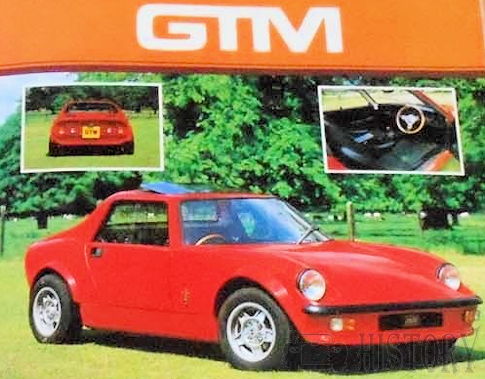 GTM was a British car brand used by many companys for kit cars from the mid 60s to recent times.

The Cox & Co. company , headed by Bernard Cox, began producing automobiles at Hazel Grove in Borough Stockport in late 1966 . The brand name was GTM . Designer was Jack Hosker. Cox & Co had to give up in 1971 after 55 vehicles sold. Howard Heerey Engineering Ltd. took over the brand name as well as the only model and continued the production for a year. By 1972 155 copies were made. HE Glass-Fiber of Hartlewood took over the project, but did not produce any vehicles during the four years until 1976. Also created between 1976 and 1980 under GTM Cars as part of KMB Autosports in Wellingborough no vehicles. Peter Beck, Paddy Fitch and Douglas Cowper took over the project in 1980 and founded GTM Cars . Cowper left the company shortly thereafter. By 1995, they produced about 600 vehicles. In 1986, a second model supplemented the range, which stood until 2003 in the offer of GTM Cars. In 1995 Peter Leslie of Primo Designs in Stoulton took over the production of the original model and continued it until 2001. In 2007, the company was acquired by Potenza Sports Cars , owners of Westfield Sportscars since 2006 . 2010, the marketing of vehicles ended under this brand name.

Manufactured kit cars . The bodies are made of fiberglass . The initially mounted four-cylinder engines with 998 cc displacement and 36 hp and 1275 cc and 53 hp came from the Mini . Later engines from Rover and VW were used.The kit car world's alternative to the Fiat X 1/9.
Gtm  is based on the Mini, but better weight distribution aerodynamics bestow proper sports car performance with handling to match the tough, durable construction. Engineering results from many years' development; recent improvements are new moulds allowing both self-finish body colours and the use of 13 inch wheels.
The basic kit costs £l073 plus VAT for chassis, body mouldings, rear suspension, front and rear screens and a pack of miscellaneous items ranging from the door hinges to the radiator fan. The sheet steel semi-monocoque chassis incorporating boxed sills and a centre tunnel accommodates a Mini front subframe at each end minus drive shafts at the front but plus special wishbones at the back to rule out rear wheel steering!.The Standard Mini engine and gearbox are retained with the addition of a special gear linkage which runs under the sump. Similarly, the radiator is repositioned at the rear and the handbrake is fitted by adapting the rear subframe backplates to fit the driveshafts. Despite the transformation from front to mid- engined layout the GTM build-up is not unduly complicated though kit building novices are advised to opt for one of the optional and more comprehensive kits.

Two further levels of completion are available, one including most items not obtainable from the base Mini, the other a very comprehensive kit which, at £l797 + VAT, includes items such as exhaust, sunroof and interior trim.

The main model was the GTM coupe . The production took place between 1967 and 2001 by various manufacturers. In total, about 700 copies were made.

The next model was the GTM Rossa . GTM Cars produced three versions between 1986 and 2003. The 2 + 2 seater coupe designed by Richard Oakes was initially powered by a miniature engine. From the first version until 1990 about 200 kits were created, from the second named Mk 2 to 1993 about 150 kits. The third version K 3 had a Rover engine. In 2003, the production of this model ended after about 400 kits. Justin Gudgeon of Northlight Sportscars took over the project, but until 2004 produced only one vehicle of the Northlight K 4 .

The GTM Libra was at GTM Cars from 1998 to 2007 and at Westfield until 2010. This was a mid-engine coupe. Engines from Rover and Honda provided the drive. In total, about 200 vehicles were created.

The GTM Spyder represented the open variant of the GTM Libra. GTM Cars from 2000 to 2003, RDM Automotive until 2007 and Westfield Sports Cars together produced about 65 kits by 2010.

The GTM Ballista from GTM Cars (RDM Automotive) was the Larini of Sculptural Engineering . After the presentation at an exhibition in January 2007, this project ended.

The GTM 40 TR from the same manufacturer also remained a prototype . He was presented in 2007 and 2008 at two exhibitions.