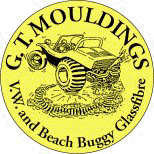 GT Moldings was a British manufacturer of automobiles . The brand name was GT.

James Hale founded the company in 1981 in Portslade near Brighton East Sussex . There he started producing car kits .  for its own model from 1997. The export was to Egypt , Belgium , Ireland and the Netherlands .  2007, the production ended.

The GT buggy was from 1997 to 2007 in the range. This was a VW buggy . The basis was the chassis of the VW Beetle . Of this version, around 40 copies were created. 2004 came a version with a 30 cm shortened wheelbase. Much less made around sold.

The GT Surf buggy was also a buggy. GT Moldings acquired the mold from the Belgian Dirk Tinck and sold two copies from 2005 to 2007.