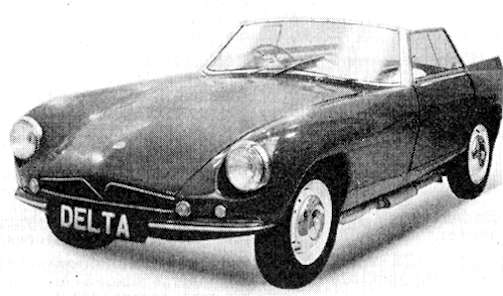 GSM Cars Ltd. was a British manufacturer of automobiles in the 1960s .The brand name was GSM .

Willie Meissner and Bob van Niekerk, who founded Glass Sports Motor in Cape Town in 1958 , founded the company in 1960. Location was on London Road in West Malling . The production of automobiles and kits began Using a chassis the jig and body moulds brought over from South Africa.  In October 1961 the production ended. In total, about 50 vehicles produced.

The first model was the Delta , which appeared in 1960 and was available until 1961. This was a coupe . The Delta's chassis was a ladder type with two very large diameter steel tubes having subframes front and rear to carry the suspension A Ford of Britain  105E  four-cylinder engine fitted to  the vehicles. Of these, 35 copies were created The engine could be obtained in many stages of tune with up to 90 bhp. At the front, this was by transverse leafspring with a single lower link and an anti-roll bar. Drum brakes were fitted all round. The rear suspension utilised the Ford rigid axle, located by twin parallel trailing arms and an 'A' bracket, with springing provided by co-axial coil- spring damper units.

In 1961, the added Delta Fastback hatchback the range. From this model 15 pieces were produced.