Automotive Manufacturer of United Kingdom from 1909 to 1916 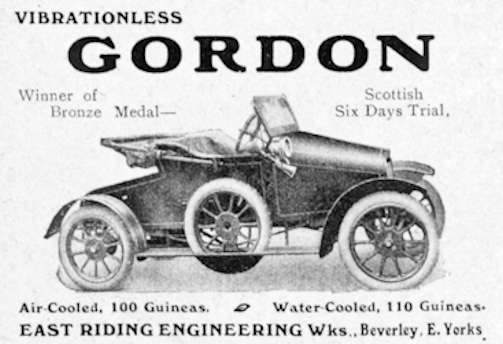 The Gordon Armstrong East Riding Garage was a British automaker that was based in Beverley,Yorkshire from 1909 to 1916 The Brand name was Gordon .

The parent company was the Armstrong Patents Company , which today produces shock absorbers for cars. Founder of both companies was Gordon Armstrong . From 1909 prototypes were created.The First World War ended the production in 1916. After the war, it was not re-opened.

In 1912, the first production model of the Cycle Cars  introduced as the Gordon 8 hp . This was equipped with an air-cooled V2 engine, which had 1.1 liters of displacement. The wheelbase was 2438 mm.

In 1914 this first model was replaced by the Gordon 9 hp with the same engine, but at 2286 mm reduced wheelbase. He was the small car Gordon 10 hp set aside, the wheelbase of the 8 hp combined with a larger engine with 1.35 l displacement. Later, the 9 hp was also available with the large wheelbase and received a water cooling.

1915 appeared another Gordon 10 hp , which was equipped with a water-cooled four-cylinder in-line engine with 1.1 l capacity. Both wheelbases were available.