Car manufacturer of Wigan , Greater Manchester;Great Britain from 1986 to 1988. 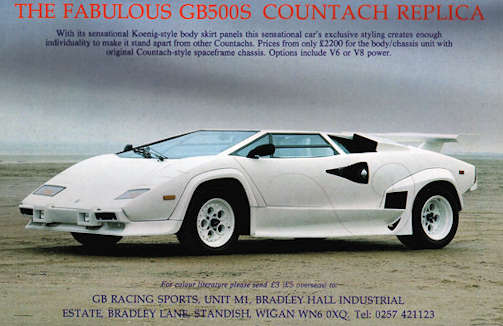 GB Racing Sports was a British manufacturer of replica automobiles from the 1980s . The brand name was GB .

Andrew Grimshaw founded the company in 1986 in Standish near Wigan , Lancashire . They started with the production of automobiles and kits . Dave Forsyth, who previously worked for Kingfisher Moldings , supported Grimshaw.  In total originated about five copies. By around 1990 production finished.

The offer was a replica of the Lamborghini Countach. This was the called the 500 S . The base for the car was a spaceframe then a coupe body was mounted. Various engines were available. Named are engines from Audi , V6 engines from Renault and V8 engines from Chevrolet and Rover .