Automotive Manufacturer of Ryde, Isle of Wight United Kingdom from 1986 to 1996 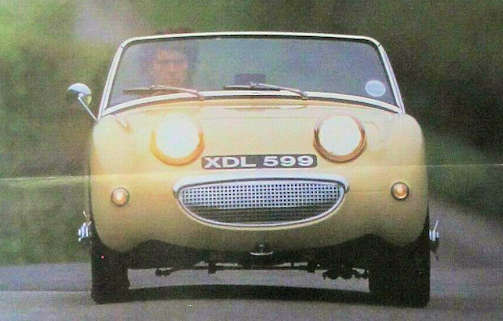 Frogeye Car Company Limited was a British manufacturer of replica automobiles . The brand name was Frogeye .

Keith Brading founded the company in 1985 in Ryde on the Isle of Wight . There he began production of cars and kits .  Island Plastics of the same island made the bodies. Total originated cars about 142 copies. Iceland Plastics continued to produce a model from 1997 to 1998 and marketed it as an ipi . In 2000 the production ended.

The model. Supersprite was a replica of the first-generation Austin-Healey Sprite . The base formed a self-made chassis of steel . On it a body made of fiberglass . The Roadster could accommodate two people. Different four-cylinder engines from the Austin A30 , Austin A35  , and the later Austin Maestro  , Ford Fiesta  and MiniMetro  were used.The original price for a complete vehicle was around £18,000  in the late 1980s .