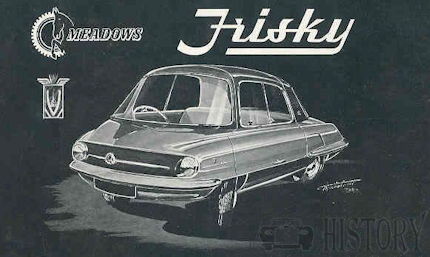 Frisky was a British car brand in the mid part of the 20th century.

The company Henry Meadows (Vehicles) Limited began in 1957 in Wolverhampton with the production of automobiles . In 1958 it was renamed Frisky Cars Limited , 1961 the move to Sandwich , and in 1963 a renamed Frisky Spares and Services Limited, combined with a move to Queenborough .In 1964 production ceased.

The short-lived Frisky was much more than a mere 'bubble' car, but rather less than an out and out tiny sports car like the Berkeley; in character, in style and in behaviour it was very definitely a minimum-sized sporting car. It had its origins in 1956, announcement in 1957, first production at the beginning of 1958, and there was a spectacular (EIOO,OOO) bankruptcy in 1959. The original Frisky was a gull-winged prototype (with styling by Michelotti) conceived by Captain Raymond Flower, who had considerable business interests in the Middle East, and was to be made by Meadows (the former proprietary engine builders) in Wolverhampton. The gull-wing car was first revealed in the spring of 1957, but the official announcement of October 1957 showed that the gull-wing idea had been scrapped as being too heavy and impractical for a glass-fibre bodyshell; instead the Frisky was to be offered with a two-door open sports body, or with a hardtop coupe
(which did not, in fact, become available for another year). — little more than nine feet long The Frisky was tiny— and was based on a tubular chassis frame layout in which the twin-cylinder air-cooled Villiers motorcycle
engine and gearbox were behind the seats but ahead of the back axle. There was Dubonnet front suspension, and final drive was by chain. It was minimal sports car Meadows Frisky Sport, with designer Gordon Bedson at wheelthe Frisky Sport cost E484 at a time when motoring in every way including the price the equivalent Berkeley was priced at E500, and when an Austin A35 saloon (for instance) cost E570. The problem was that when the Sprite was announced in 1958 its considerably more, but for considerably more car.
price was E6S7 Henry Meadows looked after final assembly, though their neighbours Guy Motors (commercial vehicle manufacturers) built the bodies at first. The Frisky had a certain cheeky charm, but had very restricted performance, and the markedly crab-tracked chassis (the rear track was only 2ft. 8in.) and lack of differential meant that its behaviour needed learning. In many ways it was a crude little machine (there was no heating of any type, and to engage reverse the engine had to be stopped and then restarted, running in the reverse direction), with problems which the low price could not excuse. In spite of commercial upheavals — Raymond Flower became Chairman and Managing Director of a new company, based on Meadows, even while production was— and a great deal of publicity, the Frisky Sport did not succeed. Frisky beginning
Cars Ltd. went bankrupt in the summer of 1959, owing at least EIOO,OOO. The cars were taken up by revised companies, but they then concentrated on slow three-wheeler mini-cars, which were no more successful than before. The last Frisky of any type was built in 1962.

Between 1959 and 1961 there was the model Family Three , a tricycle , in which the single wheel was behind. The engine was mounted in mid-engine construction behind the front seats and in front of the rear wheel. Outside the engine were two emergency seats. There are single-cylinder and two-cylinder engines of Excelsior and Villiers Ltd cm³ with 197 and used 244 cc. The model Prince from 1960 was similar, but had larger engines with 324 cc to 328 cc and 11 to 15 hp. 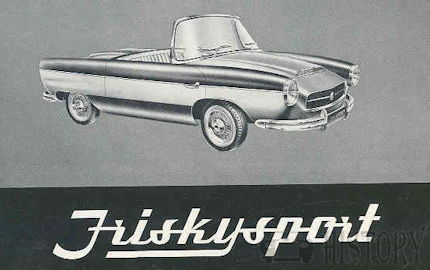 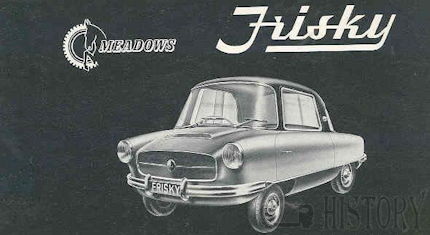