Automotive Manufacturer of Nottinghamshire;United Kingdom from 1983 to 1994 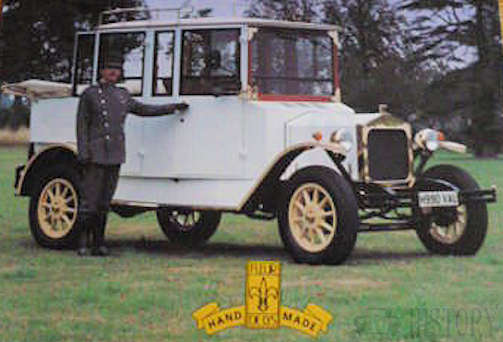 The Newark-on-Trent company in Nottinghamshire started producing Commercial automobiles in 1983.Only in 1991 began the production of passenger cars in the same style. Dionysius Andreas Liveras, Iain Robertson Muir and Kyriacos Kyriacou were the directors.By 1994, the production ended.

Initially, only commercial vehicles with the model name Newark in the style of the 1920s were in the range. The idea came from Andreas Liveras, while Len Terry designed the vehicle. A four-cylinder pinto engine from Ford with 2,000 cc displacement powered vehicles. Many vehicles were used for advertising purposes with Several vehicles exported.

Named are the models Lincoln and Belgravia . The Lincoln was a sedan that was also available as a kit car . Of these, about six copies were made. The Belgravia was a retro Landaulet style body.

Automotive Manufacturer of Nottinghamshire;United Kingdom from 1983 to 1994