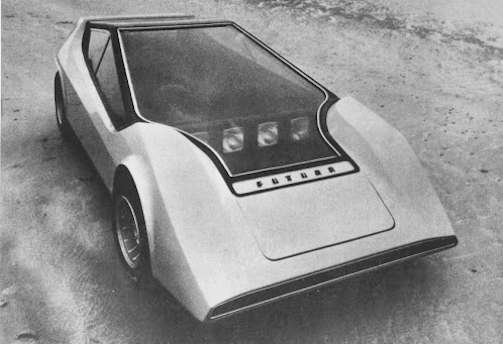 Jem cars a division of Fellpoint Limited was a British manufacturer of kit automobiles in the 1970s . The brand name was Gem Futura .

Robin Statham headed the Penn Company in Buckinghamshire . Between 1967 and 1971 he produced the Minijem . 1971 started the production of own automobiles and kits . In the same year the production ended. In total, about three copies were made of it. F

The basis of the vehicles was the chassis of the VW Beetle early type not the 1302 or 1303 with diffrent fron suspension system . Then a futuristic two-seater coupe body was mounted. Instead of side doors, the windscreen swerved laterally to allow access from the front of the vehicle to the interior body and are in seven-pieces. The mould is then bonded to an 8-gauge pressed steel frame. ducting and fresh air ducting is also built into at this Stage body is trimmed down. Windscreen/ door frame hung. rear fitted.
The body with specially developed reinforced glass Carpeted headlining fitted aircraft-style. adjustable G T instruments fuel end pressure gauges lighting Switches with a leather-bound wheel.Behind the seats is space for battery and spare wheel . There are 5 Standard body Colours,the trim includes adjustable GT seating carpet and trim. grey headlining.

Initially, it was planned to mount four headlamps behind the windshield as above, but then, due to legal regulations, folding headlamps were built into the front.