Carmakers manufactured in Great Britain from 1959 to 1964. 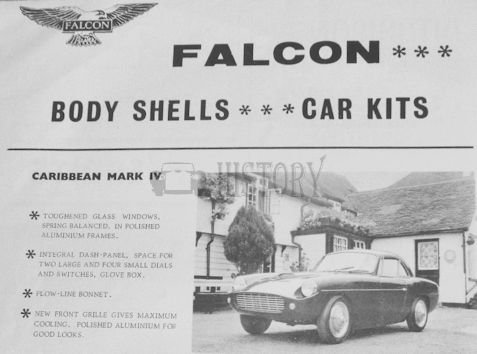 The Falcon Cars Ltd. was a British kit car automaker from Hatfield in Hertfordshire from the late 1950s.

Peter Pellandine founded Falcon Shells Ltd. in 1958 . in Waltham Abbey . He was previously a co-owner of a manufacturer of fiberglass bodies called Ashley Laminates . The brand names were Falcon and temporarily Peregrine . From 1959 the company headquarters was in Epping . In 1961 the company was incorporated in Falcon Cars Ltd. renamed. In 1962, Pellandine sold the company to Mike Moseley , who relocated to Hatfield, while Pellandine moved to Australia. Since this year, Falcon has also produced boat hulls and other GRP products in addition to automobiles and bodywork. In 1964, the company had to close because of slump in sales. In total, over 3000 copies were created.

End of the 1980s came a replica of the Falcon Mk. 2 of Autotune as Autotune Gemini on the market.

Between 1982 and 2002, other companies also used the Falcon brand name for their vehicles.

Pellandine still had the rights to the developed by Ashley Laminates kit-car bodies Ashley 750 and Ashley Sports Racer . This became the models Falcon Mk. 1 based on the Austin 7 , whose body looked similar to the Austin Healey 100 , and Falcon Mk. 2 , whose shape was inspired by the Jaguar D-Type .

1958 appeared the first complete vehicle of the company, the Falcon Competition . It had the body of the Mk. 2 and the engine of the Ford Anglia 100E. In addition to the complete kit car, only the body was available on request.

In 1959 the Falcon Mk. 3 appeared . The car was later renamed Falcon Caribbean and based on the Ford Ten . There was a coupe and a convertible version of the car inspired by Italian design. Until 1963, this model was built more than 2000 times.

In 1961, the Falcon Bermuda came out, a 2 + 2-seater version of the Caribbean, created from the approximately 200 copies. Also developed was the Falcon 1000 , a coupe with the engine of the Ford Anglia 105E Cosworth. The car, which was smaller than the Caribbean, was offered as Falcon Peregrine , but ultimately only built in two. With one of them Pellandine achieved lap records in Brands Hatch .

a model was marketed as Peregrine. An engine from the Ford Anglia powered the vehicle. The choice was open and closed bodies. Only a few copies were created in 1961.

In 1963, the company introduced the Falcon 515 . The coupe was based on the Ford Cortina we had the top -mounted four-cylinder in-line engine with 1.5 liter displacement, which, equipped with two SU carburetors, output a power of 70 bhp (51 kW)  . The body reminded of the Ferrari 400 Superamerica of 1960. Only about 25 copies were made until 1964. 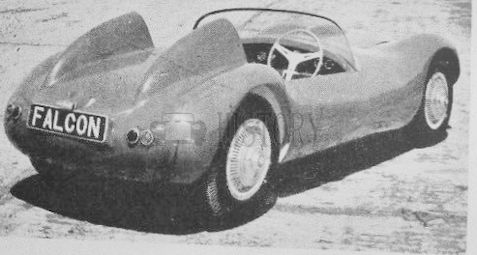