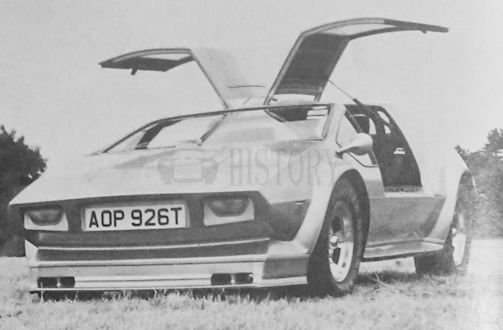 Mike Carlton, who previously when Siva Motor Car Company was active in 1975 founded the company in High Wycombe in the county Buckinghamshire . He started producing automobiles and kits . The brand name was Embeesea . In 1983, the company was dissolved.

MBC Kit Cars under the direction of Mike Carlton and Peter Dance for one year and DJ Sportscars for two years continued the production and maintained the brand name. In total, about 535 copies were made.  After trying 1986-1987 MDB Sports Carsfrom Tredegar under the brand name MDB and 1987 Viking Sport Cars from Ferndale under the brand name Viking to continue production, but represented only individual pieces here.

This model was similar to Siva Saluki . The unabridged chassis of the VW Beetle was the basis. On a coupe body was mounted with gullwing doors . By 1977, about 20 copies were made.

This evolution of the Chepeko appeared in 1977 and remained until 1986 in the assortment. With about 420 copies it was the most successful model. The successor models MDB Saratoga by MDB and Viking Dragonfire of Viking remained unique pieces.

Introduced early in 1977, the Charger steady niche with enthusiasts for the VW Beetle-based exotic breed. Good quality, strong mouldings and dramatic looks are outstanding features, the styling itself being derived from a much earlier car, the Neville Trickett designed Siva Saluki. Other impor- tant features are plenty of interior stowage space and gullwing doors, each one with a small sunroof panel.

Priced at £895 plus VAT and available only in a gloss white pigmented finish, the kit includes all the major body mouldings, doors, headlamp pods, instrument console, Perspex side windows with rubbers, door catches and door hinges. The whole assembly bolts straight to a completely standard VW Beetle rolling chassis, and using the building instructions supplied, the manufacturer estimates that a competent enthusiast could complete the car in about 100 hours. Additional parts he'll have to find during that time include Hillman Avenger-type headlamp units, a pair of screens originating from Vauxhall production models, a wiper motor, the rear lights and a pair of seats. Though a standard fuel tank can be used, a little imagination and a few measurements should see an alternative tank slot into the nose companment without too much trouble.

This model was on sale from 1981 to 1982. Again, the chassis of the VW Beetle formed the base. However, instead of the Beetle 's four - cylinder boxer engine , an Alfa Romeo engine could also be used. The notchback coupe offered space for 2 + 2 persons. In total, about five copies were made. Roy Coates of S & R Sports Cars from Barnsley in 1982 took over the project, developed it further and marketed from 1985 to 1986, some vehicles as SR .

This version of the Charger with 2 + 2 seats existed between 1982 and 1986. Also this model was a success with about 90 sold copies.  individual pieces were the successor models MDB Saturn of MDB and Viking Dragon Fly by Viking .it's a fully revised body unit known as the Charger 2! the car is a full 2 + 2 with bigger screens, bigger doors, opening side windows and more headroom. Various body colours will be available and the price will be £895 plus VAT.