Automotive manufacturer of Great Britain from 1951 to 1957. 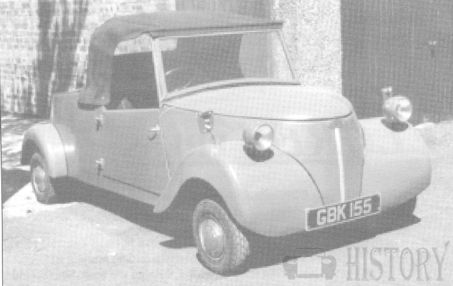 The company Battery Manufacturing Association of Hove in Sussex began in 1951 with the production of automobiles, based on the models of Hazeldine motors the BMA car do not have a traditional front grill as shown unlike the Hazeldine  . The brand name was BMA . Renamed BMA & Electrical Equipment Co. , Gates & Pearson Ltd. and finally Electric Motors (Hove) Ltd. followed. 1957 ended production. In total, seven vehicles were created.

On offer was an electric car . A four-pole electric motor with either 1.5 hp or 2 hp powered the vehicle. The transmission had four gears. The maximum speed was given at 32 km / h and the range at 96 km. The open two-seat body was made of aluminum . The price of 535 pounds was too high for a market success. The second vehicle with the chassis number E 12 received on 7 August 1951 the British license plate GBK 155  (above)