Automotive Manufacturer of Totnes, Devon; United Kingdom from 1952 to 1954 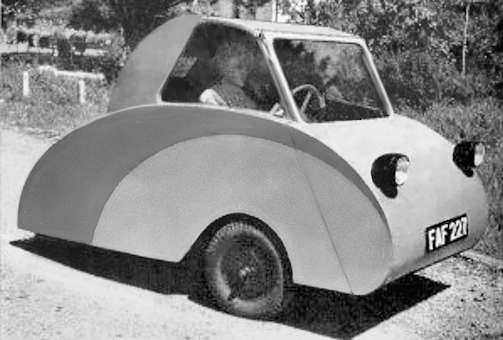 Electrical Engineering Construction Company Ltd. was a British manufacturer of automobiles . The brand name was EEC .

The company from Totnes in Devon began in 1952 under the direction of James Elliott with the production of automobiles.The cars named after a British BBC radio programme the “Workers Playtime” . Bt 1954 ended production. Overall, six prototypes produced and the company also sold two vehicles.

The offer included miniature cars with three wheels. A two-cylinder engine from the Excelsior Motor Company with 250 cc displacement was mounted in the rear and drove the single rear wheel. The body was made of steel . A front door allowed access to the interior with a single bench able to seat up to three adults. The vehicle was taller than wide. The empty weight was given as 267 kg, and the original price of £280 plus VAT  .