From Newthorpe , Nottinghamshire; United Kingdom from 1985 to 1994 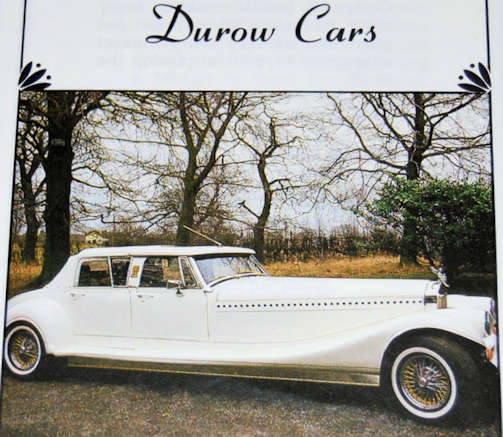 Durow Cars was a British manufacturer of kit type automobiles .The brand name was Durow .

1985 Nick Durov founded the company in Newthorpe in Nottinghamshire . He started producing automobiles and kits .  In total, about nine copies were made. 1994 ended production.

The first and best-selling model was the Deluge VS . The base was a chassis with two rails. Part of the passenger compartment came from MG Midget . The rest of the body was made of fiberglass . Many parts came from the Ford Granada . In addition to the Granada engine was also a V8 engine from Rover available. The vehicle was however 46 cm longer than a Granada.. In 1986, a kit cost £1950 . Between 1985 and 1990 created about four copies.

The Starr was even longer. His body was made of steel , aluminum and stainless steel . Between 1986 and 1990 there were three buyers.

Between 1992 and 1994 there was the Virage de Ville . He was also based on a Ford Granada. His body was inspired by the 1936 Chrysler Imperial . Only one vehicle was made.