Automotive manufacturer of Ash Vale , Hampshire.Great Britain from 1981 to 1986. 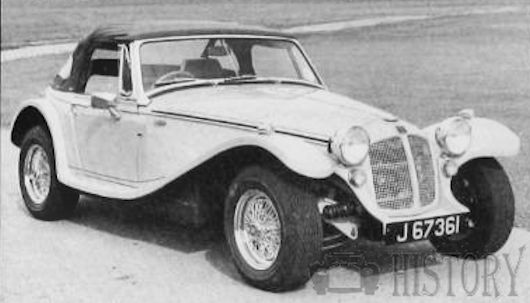 Dragonfly Cars was a British manufacturer of kit cars and coversions for automobiles in the 1980s.

Dan Pratt and Steve Watson founded the company in Hook ,Hampshire in 1981 . They started with the production of automobiles and kits . The brand name was Dragonfly . Mervyn Rees, who served as director of the company for some time, took over in 1984 and relocated to Ash Vale , Hampshire. 1986 ended production. In total due to slow build times about only 15 were made.

Introduced in early 1981, this classically-styled two-seater is actually a specialist bodywork conversion rather than a 'kit car' as such. The main structure of the base Sprite or Midget is retained intact, complete with engine, interior, doors and windscreen, but minor structural changes allow the fitting of top quality body panels which transform the simple soft-top into a charming 1930's roadster.

There Spridget conversion model had the chassis of the Austin-Healey Sprite and MG Midget.

The basic price of around £1,200 (inc. VAT) includes both the necessary structural work to the customer's Spridget and a full set of glassfibre panels ready for fitting. The front end sees the only major change to the base vehicle's running gear, for the wheelbase is increased by 10% inches by means of a well-engineered special chassis extension frame, to which the front suspension units are re-fitted, A lengthened steering column allows the relocation of the steering rack in front of the radiator, while slightly softer front springs improve the ride quality. After the rear bodywork is cut off, the inner steel panels are modified and a frame fitted. Four main panels radiator shell, bonnet, and two wing/bonnet mouldings simply bolt on, while the rear end is 'glassed in place. Remaining tasks are minor; only lights and small panels like the aluminium front apron and inner wheel arch panels have to be fitted — no mechanical work is involved at all, though the Dragonfly will obviously require painting

Dragonfly Cars could do the work for you at a cost of about £3000 inc. VAT. Better still, buy a complete turn-key Dragonfly at about £4500

There was no association with Dragonfly Cars of Nottinghamshire , which manufactured and sold three-wheeled vehicles between 1994 and 1995 with the same company and brand name.