Automotive manufacturer of Eynsford Kent.Great Britain from 1913 to 1914. 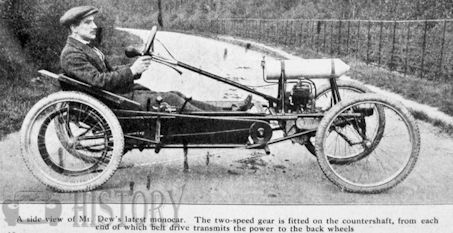 The DEW Engineering Co. Ltd. was a British automaker, which was located in 1913 and 1914 in Eynsford in Kent . There was a four-wheeled Cyclecar  called Dewcar . Harold E. Dew had designed it and built various prototypes since 1910.

The first production models were built in 1913, had only one seat and were powered by a single-cylinder engine from Precision , which was indicated at 4.5 hp. Soon thereafter, there was a two-seater, which had a larger two-cylinder in-line engine with air or water cooling. The single-seater cost £ 75 and the two-seater £ 95 (with air cooling) or £ 115 (with water cooling)  .

Harold Dew left the company in February 1914 and founded the company DU Manufacturing in London, where he built a car called D Ultra . After the departure Dews Victor Motors took over the construction of the Dewcar and continued to build it under its own name until 1920 .