Car manufacturer of Chelmsford , Essex.Great Britain from 1974 to 1999. 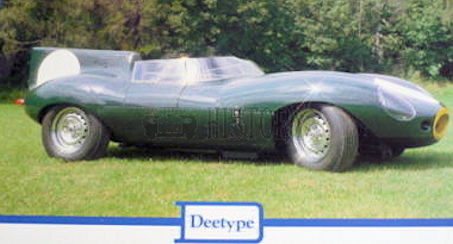 Deetype Replicas PLC was a British company in the field of replica automobiles and former automaker.

The company was founded on November 26, 1974 in East Hanningfield , County Essex . The production of automobiles and kits began. The brand name was Deetype. As of May 30, 1992 Bryan Frederick Wingfield headed the company. At the same time, but only until November 25, 1992, Steven Hind Marsh Smith was also director. Later, the company was based in Chelmsford , Essex. 1999 ended production. In total, about 26 copies were made. 2010, the company was dissolved.

This was the replica of a Jaguar D-Type . The choices were versions with long and short front. The chassis was partly made of aluminum . A six-cylinder engine from Jaguar Cars powered the vehicle. In 1979, the price of a complete vehicle was £ 23,000 . From this model created until 1981 about 22 copies.

XK-SS Replica :The street version of the D-Type, the Jaguar XK-SS , was available as a replica.