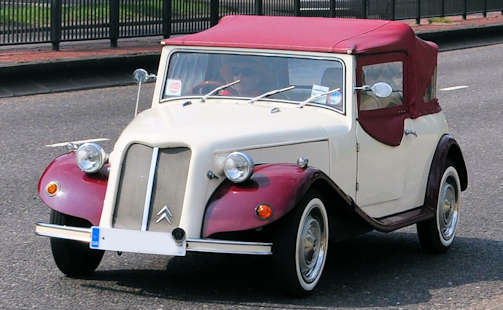 Deauville Cars Limited was a British manufacturer of kits and automobiles . The brand name was Deauville .

Michael William Richards and Benjamin Michael Richards founded on 19 February 2001, the company in Bognor Regis, West Sussex .They began in 2003 with the production of automobiles and kits . On September 24, 2013, the company was dissolved with a total originated nearly 100 copies.

The company produced various vehicles based on the Citroën 2 CV .

The Canard appeared in 2003. This was an open vehicle that found some 40 buyers. Striking was the large angular air intake opening at the front.

In the same year, the Canjito 602 came on the market. From this vehicle in the style of Citroën Méhari created about 30 copies.

Mike Horton designed the Landaulet , later renamed Sandringham . This was an elongated canard with a Landaulet body. Between 2007 and 2010, there were about three buyers.

Danny Blaauw, who drove the vehicles in the Netherlands, designed the Hot Rod , also called Rondo and Corbeau . This was a two-seater roadster , from which between 2007 and 2008, about two vehicles originated. Voglietta Cars from the Netherlands tried to offer this model under its own name.

The Canard 2 appeared in 2010. It was similar to the Canard , but had a round air intake opening in the front and differently designed doors and trunk lid. Until the cessation of production, about ten vehicles were created.