Car manufacturer of Newmarket,Suffolk;Great Britain from 1968. 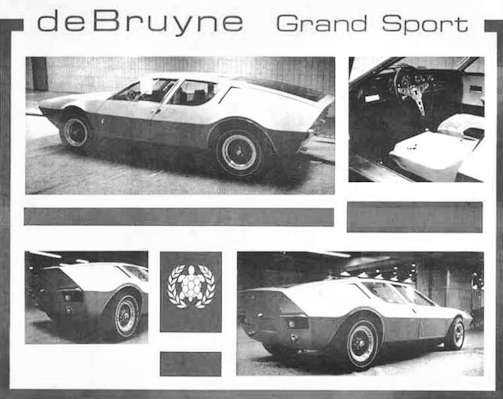 The De Bruyne Motor Co. was a British automaker, which was only made in 1968 from Newmarket in Suffolk from the assets of Keeble Cars Ltd .

From De Bruyne there were two models. The first corresponded to the Gordon Keeble the Grand touring , the second was the well-known 5.3 -liter V8 engine from Chevrolet installed as a mid-engine V8 the Grand sport .

However, both had been exhibited at a 1968 Motor Show neither of the two models arrived on the market as to produce both cars in great volumes made the project financially unviable and by 1968 the company ended with only the 2 prototype cars built.