Automotive Manufacturer of Runcorn , Cheshire; United Kingdom from 2005 to 2008 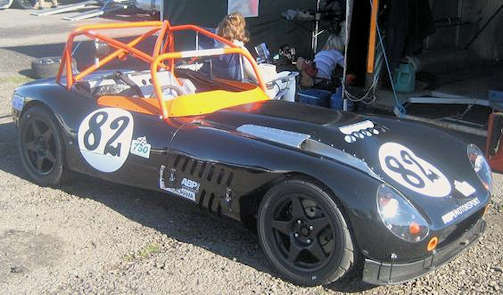 Cyana Sports Cars was a British manufacturer of automobiles . The brand name was Cyana .

2005 Ian Boulton founded the company in Runcorn in the county of Cheshire . He started producing automobiles and kits . By In 2008 the production ended. Overall, at least about seven copies.

Cyana acquired the Phoenix model from Sylva Autokits in 2005 and continued production until 2008. This was a two-seat roadster . Brand name and production number are not known for this model.

The MX-500 was based on this model. The engine, however, came from the Mazda MX-5 . The base was a spaceframe chassis. On it a body made of fiberglass wasmounted. Finished vehicles cost from $14,999 . Between 2006 and 2008, about six vehicles were created.

The VII was an in-house development. It was an open vehicle in the style of the Lotus Seven . The four-cylinder engine came from the Reliant Robin . Although offered from 2005 to 2007, only one vehicle has survived.