Automotive Manufacturer of Manchester;United Kingdom from 1967 to 1971 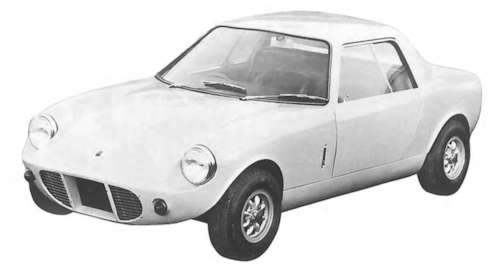 Cox & Co. was a British manufacturer of mini kit car automobiles in Manchester . The brand name was Cox GTM  .

Bernard Cox founded the company in Hazel Grove in 1967 and began producing automobiles designed by Jack Hosker.  In 1971, production ended when the company went bankrupt. In total, about 55 copies were made.  Later GTM continued production under its own brand name for many years.

The only model was the Grand Touring Mini or Grand Touring Mid-Engine , short GTM . A chassis made of steel formed the basis. In front and behind were modified subframes from the Mini . The four-cylinder engine of the Mini was mounted in mid-engine construction behind the seats. The coupe offered space for two people.

CHASSIS: The chassis is of semi-monocoque construction. made up from 20'22 gauge sheet steel. electrically spot welded and brazed. The chassis is constructed in the form of a back-bone with a 10 inch deep box joining two forks supplemented by two 5 inch sills, producing an immensely Strong unit
with a high strength/weight ratio.

ENGINE TRANSMISSION REAR SUSPENSION: The engine transmission and rear suspension is the complete Mini, Mini-Cooper front end unit. bolted into the rear of the G. T. M. chassis. The steering arms are then located to the sub-frame with adjustable rods and Rose joints.

BRAKES: Normal B.M.C. layout is used, but the best set-up is discs front. drums rear. In Our tests we have found this to be the best balanced system.
With discs all round we have found over braking at the rear and difficulty in incorporating hand brake mechanism.

PETROL TANK: The petrol tank is normal Mini and is mounted under the front bonnet. A larger petrol tank can be used without imparing the handling of the car.
STEERING: Steering is normal Mini rack and pinion steering with a lengthened steering column.

COOLING SYSTEM:The normal Mini Radiator is used mounted on its in front. behind the air intake and connected to a her tank mounted above the engine.

Automotive Manufacturer of Manchester;United Kingdom from 1967 to 1971