Automotive manufacturer of Bedford.Great Britain from 1919 to 1923 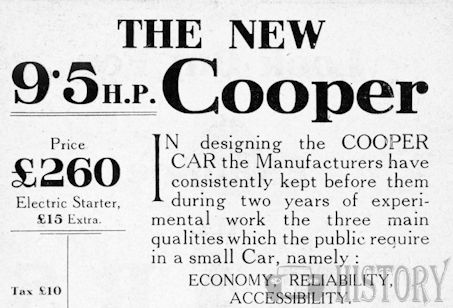 The Cooper Car Co. Ltd. was a British automaker, which was based in Bedford from 1919-1923 . This company has nothing to do with the company of the same name in Surbiton (Surrey), which built racing sports cars from 1946 and later also the Mini Cooper .

The Cooper  was a light two-seat, open-top touring car 13cwt weight and 8ft 6" wheelbase that appeared in 1919. Although the manufacturer was in Bedford, most of the cars were built in Coventry . They were powered by 9.5 hp water-cooled,  four-cylinder engines with a displacement of 1,246 cc.Bore 64mm a zenith carburetter and magneto ignition and a 3 speed gearbox.the standard body colour dark blue and basic price of £260.

In 1923, the company had to close its doors for economic reasons.