Automotive manufacturer of Chester-le-Street , County Durham.Great Britain from 1980 to 1986. 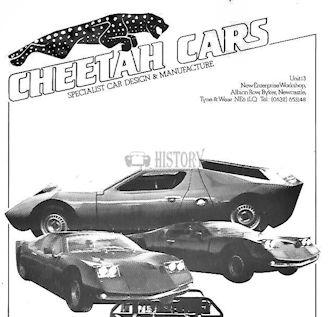 Cheetah Cars was a British manufacturer of kit car automobiles in the 1980s .

Kevin Mason founded the company in 1980 in Newcastle upon Tyne in the county of Tyne and Wear . He started producing automobiles and kits . The brand name was Cheetah . In 1984, he moved to Chester-le-Street in County Durham . 1986 ended production. In total, only about 19 were made.

The Mirach of 1983 was somewhat similar to the Lamborghini Miura . The four - cylinder boxer engine came from the Alfa Romeo Alfasud and the windshield from the Ford Cortina . The manufacturer himself warned against a difficult assembly. Only one copy was made.

is a thoroughly modern interpretation of the classic two-seater mid-engined coupé of the sixties. Engineering integrity has been a significant parameter in the car's design, and it offers a specification to delight the most discerning sports car enthusiast. The nicely finished fibreglass body hides a computer-optimised chassis which houses a mid-mounted Alfa Romeo Alfasud engine with double wishbone suspension all round. A real driver's car!

The basic body/chassis kit, priced at £1490 plus VAT, comprises the chassis with the central body section bonded into place. The hinged front and rear sections are fitted, as are the Cortina windscreen, side and rear screens, plus the dashboard and roof console. Components from the 'Sud to be supplied by the customer (though available from Cheetah) include the powertrain complete with driveshafts and hubs, radiator, master cylinders and instruments. Front hub assemblies come from the Cortina Mklll, as do the steering rack and other miscellaneous items such as door locks and hinges, heater ducts and controls. Front wishbones, rear suspension uprights and top wish- bones, gear linkage and various mounting brackets are also supplied with the basic kit. Lotus Seven adjustable spring damper units are available separately as are all accessories required to finish the car.

Various trim options are available, with prices starting from around £60. Seats, lights, wheels and tyres may also be supplied as extras.
The chassis may be adapted to accept the Escort steering rack, allowing the use of a readily available quick rack.

The Mirach 2 as successor to the Mirach was presented in 1984 on the Kit Car Show in Stoneleigh . This was more similar to the Lamborghini Miura. The base was either the Jaguar XJ 6 or the Ford Granada . There were different versions: one with a Alfasud engine as mid-engine , one with a semi- monocoque and four-cylinder engine from Ford and V6 engines from Ford and V8 engines from Rover as a front engine. By 1986 three copies were produced. 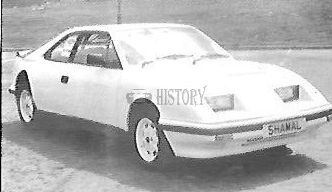 The Viper was the most successful model with eleven copies sold between 1984 and 1986. It was the replica of an AC Cobra . Many parts came from Triumph and Ford, the windshield from MG .

The SV 1 was from 1985 to 1986 in the offer. It was a roadster. motors came from the Lancia Beta or Alfasud. From this model a copy was made. 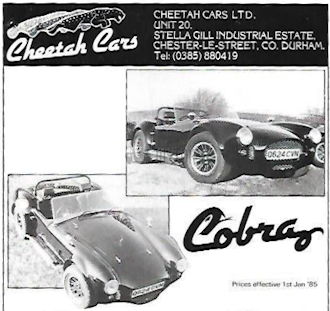