Automotive manufacturer of Berkshire;Great Britain from 1927 to 1936.

Burney was a British car brand, which from 1927 to 1936 from the Streamline Cars Ltd. in Maidenhead (Berkshire) . The company was founded by Sir Dennistoun Burney and exclusively produced streamline vehicles with engines from different manufacturers. A prototype was based on an inverted Alvis - front-wheel drive chassis developed.

After some experimental vehicles , the 22/80 hp was introduced in 1930 as the first "production model".The eight-cylinder in-line engine with two overhead camshafts had a displacement of 3.0 l, was installed at the rear and came from Beverley-Barnes . As was customary in the aviation industry at the time, all electric cables were routed as flexible cables in copper pipes.

The car was equipped as standard with fully hydraulic brakes and a heater. Beside the engine two radiators were accommodated.The chassis of the four-door sedan had a wheelbase of 3,785 mm. The interior with 7 seats was completely housed between the two axles and the engine was behind the rear axle. The spare wheel was installed at a rear door in; either a second spare wheel or a bar hung on the opposite door.

Typical were the short front overhang and the long tail overhang, which took up the engine. In order to reduce the air resistance was covered and the underside of the frame plate.attached great importance to the constructors a large inner height.

The selling price was £1,500, late 1930, the Prince of Wales bought the fifth copy; the ninth and last copy went in early 1932 as an exhibit to the Detroit Car Show . None of the nine cars survived until today. The car was very quiet and pleasant. The high engine weight behind the rear axle made for a dangerously unstable handling in rain and wind. The turning circle was 11.887 m.

When production ceased in 1934, only twelve "production vehicles" had been produced, nine of them 22/80 hp. In 1936, the company finally closed its doors.Burney's ideas were used in other vehicles, such as B. Crossley's streamline vehicle . In the factory halls of the Streamline Cars Ltd. Later the Marendaz and the GWKwere manufactured. 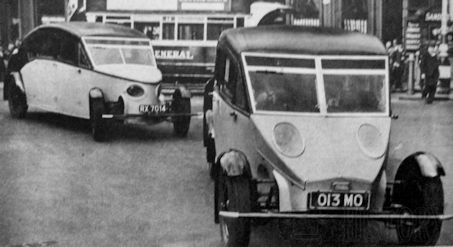