Automotive manufacturer of Loughborough,Leicestershire.Great Britain from 1900 to 1910. 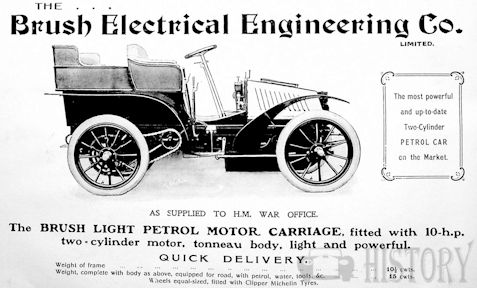 The Brush Electrical Engineering Co.Ltd. was a British automobile and electrical engineering manufacturer in Loughborough,Leicestershire  .

The company was founded in 1880 as Anglo-American Brush Electric Light Corp. founded. In 1889, it became the Brush Electrical Engineering Co. Ltd. The import of vehicles of the French manufacturer Ateliers P. Sage began around 1900. Passenger cars were manufactured between 1902 and 1904 in a factory in London . The last model was called Brushmobile . This model was created in Loughborough. Until 1910, the company produced chassis for commercial vehicles. Between 1946 and 1968 three- and four-wheeled commercial vehicles with electric motors .

1902 appeared the Brush 10 hp with a two - cylinder inline engine from Abeille with 1.0 liter displacement . The chassis had a wheelbase of 1981 mm.

In 1903, this first model was replaced by three other models. All were equipped with four-cylinder engines from Abeille and had a wheelbase of 2184 mm. They were sold as Brush 12 hp , Brush 16 hp and Brush 20 hp .

1904 appeared as the last model, the Brushmobile . The single-cylinder engine offered either 5 hp or 6 hp. The vehicle had 2057 mm wheelbase. All four wheels were suspended by coil springs. Brush cooperated with Vauxhall for this model , using not only the same manufacturing equipment but also a number of constructive similarities. 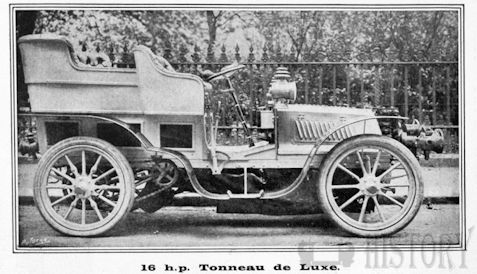