Automotive manufacturer of Eastover, Bridgwater Somerset.Great Britain from 1905 to 1908. 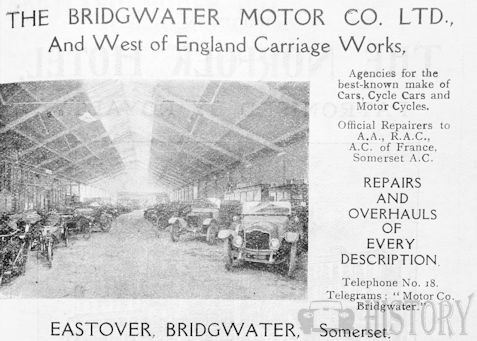 Bridgwater Motor Company was a British dealer, car repair and manufacturer of automobiles in the early part of the 20th century .

The company went from 1887 in East Quay and founded Harry Carver's Cycle Works . In 1900, the repair of motorcycles and automobiles began. 1902 came the distribution of vehicles of the brands De Dion-Bouton and MMC . 1904 followed the move to Eastover at Bridgwater . The production of own automobiles ran from 1905 to 1908. The brand name was Bridgwater . In total, twelve vehicles were created.  As a dealer for Austin and Renault , the company existed until the 1994

The basis of the vehicles were chassis of Malicet & Blin . Built-in motors were sourced from Ballot and White & Poppe with12 HP and 14 HP .  For all motors it was four-cylinder engines with T-head . The bodies were manufactured by Raworth & Co. from the same location.