Automotive manufacturer of Dorset.Great Britain from 1981 to 1987. 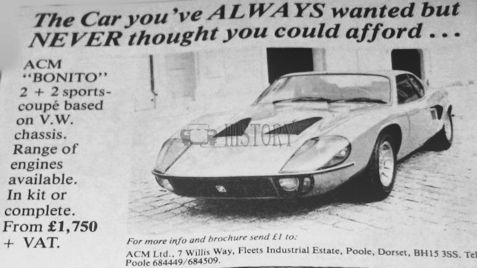 Bonito was a British kit car brand in the 1980s.

Alan Bradshaw and Hans Alma founded ACM Limited in 1981 in Poole , County Dorset . First, they imported kits of Fiberfab from Germany . Soon after, the move to done Torpoint in Cornwall .  There began the production of automobiles and kits . The brand name was Bonito .

Graham Keane led AED International . Its headquarters were  in Torpoint, Cornwall; . He continued production from 1983 to 1984. This was followed by Bonito Performance Center from Torpoint from 1984 to 1985.

Bristol-based Seraph Cars , led by John Grossart, took over the project in 1985, developed it further, and continued production until 1987. He used the brand name Seraph . Overall, emerged about 63 copies.

The kit on offer for£1,750 plus vat was the only model. The basis was the chassis of the VW Beetle . With a 2 plus 2 coupe body The vehicle was similar to the Ford GT 40 .  The windshield came from Ford and the rear window of the Opel Rekord .AED produced on this basis also an open vehicle, which remained a single car production.

Introduced to the British market from Germany, the Bonito 2 + 2 offers an enticing blend of practicality. Though mounted on a V W Beetle backbone
chassis, the Bonito will accept engines from the Golf, 1600/2000, Ford 1600 crossflow or even the Lancia place of the standard VW air-cooled unit. A well sorted and a roomy, refined interior give the exciting Bonito the comfort and handling to match its GT 40 inspired looks.

Offered at £ 750 plus VAT, the basic Bonito kit consists of an uncoloured glassfibre bodyshell with unfitted panels for the interior, doors, facia, bonnet and boot, together with a complete set of windows. The well made body fits onto any V W chassis that has torsion bar front suspension (the MacPherson struts fitted on the VW 1302 and 1303 models project too high for the sleek front styling) though the pedals, handbrake, gearlever and steering column all require relocation or modification. The use of the later type swing axle at the rear gives excellent handling — particularly in conjunction with special Bonito chassis stiffeners which give greater rigidity.

The beautiful Bonito is offered in various further stages of assembly from a comprehensive kit all the way up to a complete car fitted with a 65 bhp VW engine and full equipment. To save the kit builder a great deal of time and trouble, perhaps the most desirable item on the options list is a fully prepared, zinc sprayed VW chassis at £545 plus VAT. At the other end of the price scale, there is also a full range of components and cosmetic accessories.