Automotive manufacturer of Leeds, Yorkshire;Great Britain from 1919 to 1925 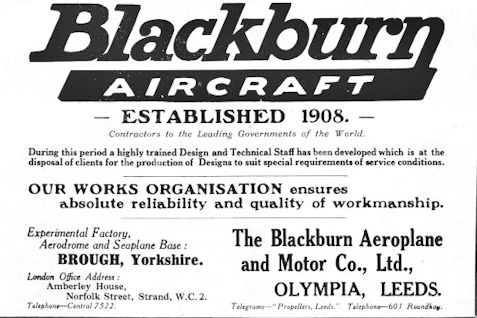 Blackburn Aeroplane and Motor Co. was a British aircraft and auto manufacturer . The company, founded in 1914, in Leeds, Yorkshire.

The company was founded in 1914 shortly before the outbreak of World War I previous work by Robert Blackburn back to 1908 as "Blackburn Airplane" (later "Blackburn Airplane & Motor Company"). During the war, it produced over 100 biplanes for the British Air Force and British naval aviators. Successful was, inter alia, the Blackburn Kangaroo , a twin-engine bomber, mainly used for hunting for German submarines in the North Sea .

After the end of the war, the company acquired a former ball bearing factory, where it manufactured fittings and other spare parts for the aircraft industry. With this second leg as a supplier company, Blackburn survived the years in which orders for aircraft newbuildings declined sharply.

Between 1919 and 1925 Blackburn manufactured automobiles . A four-cylinder engine from Coventry-Simplex with 3160 cc displacement powered vehicles, production was concentrated on other areas and stoped by 1925 but acquired Jowett cars in the mid 1950s.

After Robert Blackburn had designed the first seaplane in 1914, the focus of production in the post-war years and at the time of World War II on naval aircraft such as torpedo fighters, submarine aircraft, flying boats and carrier-based machines. Therefore, the main production in the period 1928-1932 was relocated to the factory acquired in Brough in 1916 , a site near a water surface. The problem was, however, the transport of over 1000 employees from the previous headquarters in Leeds, which had to be transported daily by train to Brough.