Automotive manufacturer of Leeds , Yorkshire.Great Britain from 1982 to 1985. 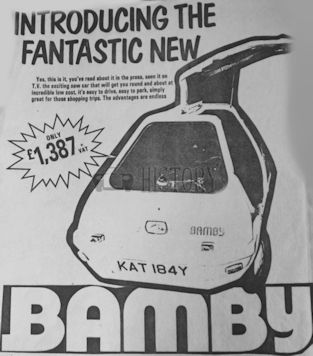 Bamby Cars Limited was a British manufacturer of small automobiles in the 1980s .

Alan Evans founded on 18 March 1982, the company in Leeds in the county of Yorkshire . They began in 1983 with the production of automobiles. The brand name was Bamby . 1985 ended production. about 50 vehicles made.

The only model was a one-seater microcar . The body was made of glass fiber reinforced plastic . A special feature was the hinged door , with which the first models were equipped. Later models had a normally doors. The car had a rear single wheel.With gearless drive a moped engine with 50 cc , which came from either Minarelli , Suzuki or Yamaha , powered the vehicle with over a 100 miles per gallon. The empty weight was stated as 107 kg. The price of £1,389  plus vat was still too high for a bigger market success with a possible market for 16 year olds driving on a motorbike licence.