Automotive manufacturer of Brierley Hill, Birmingham.Great Britain from 1969 to 1973. 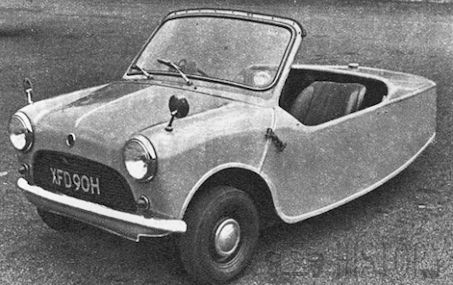 Auto Body Craft was a British manufacturer of 3 wheel automobiles from the late 1960s .

Ken Heather and Bill Powell founded the company in Kingswinford in Birmingham in 1969 and began producing automobiles.  The brand name was ABC . 1971, a change of ownership and then moved to Brierley Hill . By 1973, the production ended.  Total production less than 30 made.

The only model was a small Tricar  as there was only one wheel in the rear. . These were 3 wheel cars with the front corresponded to the panels from a mini .  It was the first mini-based British tricycle. At first the bodies made of metal using mini parts , after 1971 to save costs they were made from fiberglass . The open body could accommodate two people
.