Automotive manufacturer of Carmarthenshire , Wales.Great Britain from 1994 to 2000. 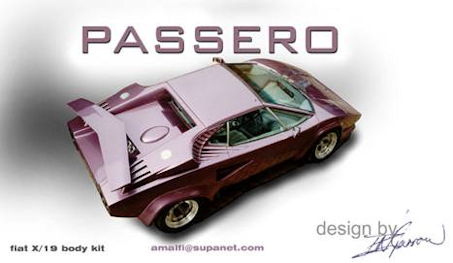 Amalfi Sportscars was a British manufacturer of replica automobiles .

Paul Sparrow founded the company in 1994. As the site are both Basingstoke in the county of Hampshire and Newport in Monmouthshire Wales called.  They began production of cars and kits . The brand name was Amalfi . 1997 followed the move to Ammanford in Carmarthenshire . In 2000 the production ended. Total created very few copies.

The first model was the Passero . It was similar to the Lamborghini Countach , but was 33 cm shorter and 13 cm narrower. A spaceframe frame formed the base. For the drive were four-cylinder engines from the Fiat X 1/9 and Lancia Beta. Special feature were six headlights, which were designed as folding headlights . 1997 accounted for the model name Passero . The revised frame was now designed for the suspension of the Ford Granada and Ford Scorpio.