Automotive and kit car manufacturer of Barnsley , South Yorkshire. Great Britain from 2003 to 2014. 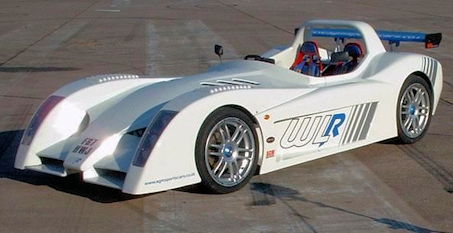 AGM Sports Cars Limited was a British manufacturer of automobiles from the 2000s.

Alan Whitehead and Glynis Whitehead founded on 16 December 2003  the company in Barnsley in the county of South Yorkshire . They started with the production of automobiles and kits . The brand name was AGM . On December 23, 2014, the company was dissolved.  Overall, developed over 30 vehicles.

The first model was the WLR . This was an open two-seat racing sports car and was street legal. Different four-cylinder engines from Ford and V8 engines of Rover were available. Many parts came from the Ford Sierra . This model created until 2014 and about 30 copies.

Technically similar was the Revolution-X . The vehicle front was held in the style of the Lotus Seven . However, the rear fenders were fully integrated into the body. The vehicle was first presented in 2005 and then offered for years. Nevertheless, few were sold.

The Ron Champion was just the body of fiberglass for a vehicle like the Lotus Seven. The chassis had to be organized by the buyer himself. Nevertheless, there were about 50 buyers from 2008 onwards.

The Haynes Roadster appeared in 2011, was designed the same way and found about ten buyers.